Posted at 10:20h in TRG in the Media by Thermo Regulatory Genetics 0 Comments
0 Likes

A New Zealand company based in rural Waikato is breeding dairy cattle destined for the hottest countries around the world in a bid to help feed some of the globe’s most protein deficient nations.

On a 44-hectare farm at Ohaupo, just outside of Hamilton, Thermo Regulatory Genetics (TRG) has assembled a herd of 200 Slick bovines as a core breeding nucleus with short hair and large pores that stop them heating up as fast as normal cattle.

Their lack of hair keeps them up to 1°C cooler than most other cattle and makes them ideal for dairy operations in tropical countries.

With the investment of more than $1 million, with funding support from Callaghan Innovation, TRG has bred the world’s largest team of homozygous bulls consisting of four Jersey bulls, nine cross-bred bulls and one Holstein Friesian, that will provide semen to be exported and used to breed heat tolerant cattle in the tropics.

The homozygous bulls’ “Slick” gene will give all of their offspring short hair and large pores and make them look shiny and confer the heat tolerance. 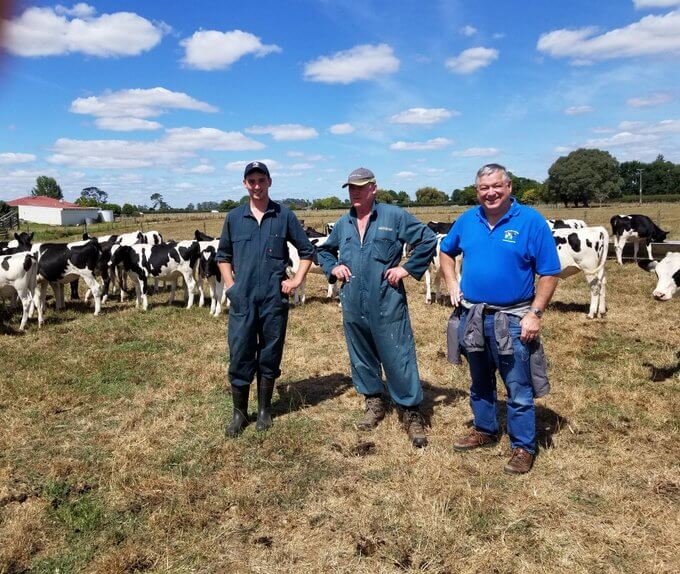 Using genetic testing they track both the animals’ genotype, its full hereditary information, and the animals’ phenotype data, its observed and up to 60 genomic traits, and use the information to continue to focus and refine the herd.

“The Callaghan Innovation funding has allowed us to transition to a technology driven precision breeding program. We can now choose the very specific animals we want to breed from and the bulls we need to use to get the traits we want,” says Derek.

As the New Zealand Government moved in April to stop live cattle exports Derek says New Zealand has sometimes exported the wrong type of cattle overseas, some have not been bred to cope with the tropical climate they arrive in.

He was compelled to breed the cattle after visiting some of the world’s poorest nations and seeing herds of cows suffering heat stress and poor production because they struggled in the hot and humid climates.

“I came away from those trips wanting to develop better genetics for tropical countries because we know the added financial returns from better-producing cows can literally mean the difference between a farmer sending his child to school or not.”

He said the company was also breeding polled genetics (cattle that don’t grow horns) which reduces the risk of infection from dehorning in humid environments; cows that specifically produce A2 milk, particularly for countries like Pakistan, and cattle resistant to ticks, another major issue in tropical countries.

“There’s 250 million dairy cows in the tropics so there is real potential and opportunity in developing the right cow for that climate and we’re now at the forefront of that development,” says Derek.

Sorry, the comment form is closed at this time.